Mentoring Students is a Win-Win 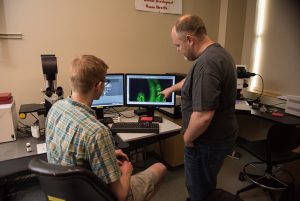 INBRE Program Coordinator Dr. Dustin Updike has mentored 13 undergraduate students in his lab at the MDI Biological Laboratory, 6 of whom were supported directly by the INBRE program. INBRE students mentored by Dr. Updike are currently conducting graduate research at Dartmouth College, Cornell University and also working in research jobs at the Broad Institute at Harvard and the MDI Biological Laboratory.

One reason I came to the MDI Biological Laboratory was because of its unique summer student program. Each year, the best and brightest are selected through a highly competitive process and are funded by Maine INBRE, NSF REU, and private endowments. For ten weeks, these students stay in campus dorms, work in our research labs, receive instruction in lab safety and ethical research, attend classes that provide training in bioinformatics and science presentation, and are exposed to a variety of career opportunities.

Mentoring these students provides unique opportunities to enhance faculty research capacity. They come in eager to learn and with the determination to make a lasting contribution. Ten weeks is a small window, but summer students are up to the challenge and often take on projects which some might consider a gamble.  What I mean is that there are projects in science that might not work out; however, when they do, the breakthroughs make them worthwhile. In the worst-case scenario where the experiment does not have the expected outcome, students still learn scientific techniques and principals they will carry with them. In the best-case scenario, their discoveries make significant contributions to ongoing projects and publications.  It’s a win-win for everyone involved.

In the Updike Lab, forward genetic screens are one of these high-risk, high-reward undertakings. These screens are ideally suited for summer students and represent the purest form of science because the approach is unbiased. Let me explain how these screens work.

We use C. elegans, nematodes that are 1mm in length as a genetic model to understand cytoplasmic regulation in the cells that give rise to oocytes and sperm. You can grow up thousands of these microscopic animals on a single petri dish. Yet, they undergo many of the same developmental processes as humans and carry the same number of genes.  Understanding how a gene functions in humans is much easier and more cost-effective when you can first understand how a nearly identical gene functions in nematodes.

To perform forward screens, students induce DNA damage in a way that creates about two mutations in every one of the worm’s 20,000 genes. When the grandchildren of these mutated worms reach adulthood (all of this happens within two weeks), students screen the worms for specific effects or “phenotypes” where the cellular or developmental process of interest has gone wrong. In our case, we look for phenotypes that disrupt cytoplasm in reproductive cells. Later, the DNA mutations causing these phenotypes are identified, telling us which genes are involved in the process of interest.  The forward screen approach can be likened to understanding how a car is built.  By tying the hands of a worker before they enter the factory, you can determine their job by seeing what’s wrong with cars as they roll off the assembly line.  In our case, the workers are genes and the factory a cell.

The first summer in my lab, I had the fortune of mentoring a student who isolated 19 mutants. At the end of the summer, these mutants worm lines were passed along to other researchers in my lab, who then identified the affected genes. Two publications and the function of a novel gene came out of this work initiated by the summer student.

The following year I had two INBRE students who performed a similar screen without success in 2014 – University of Maine at Farmington graduate Hannah Lust and University of Maine Honors College graduate Monique Theriault. It was a learning experience for all of us, and one that we still laugh about even though they are miles away in graduate programs at Cornell and Dartmouth.  We quickly restructured and got them on another project – one that was eventually published. 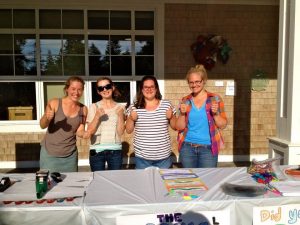 The Updike lab in 2014. UMaine Honors College graduate Monique Theriault is second from left and UMaine at Farmington graduate Hannah Lust is second from right. Monique is now pursuing a Ph.D. at Cornell University.

Because of this unsuccessful screen, I waited a summer before having students attempt another one.  Heath Fuqua, an INBRE-funded student with the College of the Atlantic in the summer of 2016, was up for the task, isolated ten mutants, and launched a project that was published just last year.

Heath Fuqua, College of the Atlantic graduate and INBRE summer fellow in the Updike lab in 2016, recently moved back to Maine to take a full-time research assistant position at the MDI Biological Laboratory.

In other years, I’ve had students express the desire to learn specific techniques, such as precision gene editing with new CRISPR technologies. Other students have taken advantage of the Maine INBRE-supported Microscopy Core to receive training in high-resolution and time-lapse imaging.  INBRE Research Resources Manager and Microscopist, Dr. Frederic Bonnet, facilitates these projects and provides students with the training they need to understand the microscopy concepts that allow them to acquire images and quantify their findings.

Conditions caused by COVID-19 prevented us from bringing students to live on campus this past summer.  Yet, for many of our students, this would be their only opportunity for this experience before they graduated. Where possible, faculty developed projects that could be performed remotely.  In collaboration with Dr. Emily Spaulding, a postdoc at the MDI Biological Laboratory, and Dr. Joel Graber, INBRE Bioinformatics Core Co-Director, we put a plan in place.  A rising senior from Washington and Lee University, Alexis Feidler, worked with us on a computational project to create a comprehensive list of proteins with a unique protein domain shown to be essential for partitioning protein synthesis within the cell.  Fortunately, she came to us with an enormous amount of computational experience and was successful in not only generating comprehensive lists of proteins with these domains, but identified consensus protein sequences that have potential to define distinct cytoplasmic domains.  She proposed experiments, based on her findings, that we’re currently working on. Because of the situation due to the pandemic, Alexis turned lemons into lemonade, leading to discoveries we wouldn’t have explored otherwise.

These past seven years of mentoring students have been rewarding.  I’ve now watched as students from past summers graduate and go to biotech industries, medical schools, and graduate programs, and I like to think that their experience during those ten weeks at the MDI Biological Laboratory helped them on their journey.

Hannah Lust, Ph.D. candidate in the Department of Microbiology and Immunology at Dartmouth College, was an INBRE-funded undergraduate student at the University of Maine at Farmington who worked with Dr. Updike in the summer of 2014. She says of her experience:

“I joined Dustin’s lab having had little wet lab experience throughout undergrad. Up until that summer, I had only taken courses where you have general exposure to lab techniques, so this was the first time I was fully immersed in the world of research. Thankfully, I was lucky enough to have Dustin as a mentor and my very first Principal Investigator. His patience, kindness, and sense of humor fostered the perfect environment for me to fall in love with research and set the tone for my future as a scientist.”

“Without my opportunity through INBRE, I wouldn’t have known that scientific research was the path for me. Thanks to that invaluable experience, I am now nearing the end of my Ph.D. at Dartmouth College with a hope to eventually return to Maine as Principal Investigator at a facility close to home.”