While the norms of campus life at Bates College changed rapidly with the arrival of the coronavirus, assistant professor Andrew Kennedy says that there has been some serendipity amongst the chaos. Despite the challenging situation, he is working with nine remote students this summer, mainly on bioinformatic projects involving data analysis. His lab was fortunate to have just received a new catalogue of sequencing before the pandemic that students are using in their projects. 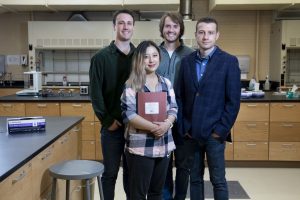 Kennedy has also ‘rescued’ two international students (the only students at Bates who are doing lab work on campus now) who were slated to work with another faculty member but found themselves stranded when the pandemic began.  Already trained in behavioral assessment (which is solo work conducted in full PPE) they have stepped in to assist the Kennedy Lab in studying and maintaining the animal colony.

As one of the larger labs at Bates, Kennedy is grateful he didn’t have to shut down his animal colony on top of pivoting to online teaching. “Transitioning to remote in the spring was difficult – I had to move to asynchronous materials to accommodate everyone’s schedules, put my research on the backburner to be able to focus on the teaching pivot, and mentoring students in lab research is hugely challenging when you can’t just look over their shoulder to see what they’re seeing,” Kennedy says. “I’m glad that I didn’t have to shut down the lab – for the research itself; but also because keeping the lab running has meant that my summer students have been able to gain valuable experience – albeit different than what we had originally planned. Students have felt a sense of community and been able to counsel each other through how their junior or senior year at college may look very different to what they thought.”

The Kennedy Lab focuses on epigenetics – understanding how genes can change their function without being altered themselves – with a focus on the chemical mechanisms than encode and maintain long-term memory. A goal of the lab is to develop therapies that enhance cognition in cases of intellectual disability, such as memory in Alzheimer’s disease and in Pitt-Hopkins Syndrome, an extremely rare condition caused by the insufficient expression of just one gene, TCF4.

Kennedy’s lab has made significant achievements in potential therapies for Pitt-Hopkins, including a molecule called Bobcat339, that was created in his lab in 2017 and is now going through the patent process. Read more about Bobcat339 and the interesting origin of its name here.

Alongside research and mentoring eleven students, Kennedy is focused on planning for the fall semester and retooling the Bates College INBRE short course on genome sequencing that he will teach in May 2021.

Maine INBRE Investigator funding has had a significant impact for Kennedy’s work. “INBRE has totally changed things for me – my lab has been able to grow and progress faster than I thought,” says Kennedy. “Also, being able being able to “sell” INBRE as a funding avenue has been critical to recruitment.” Kennedy is also funded in-part by the Pitt Hopkins Research Foundation.